This morning enjoy a Panoramic Tour of Dublin City

First, discover the north side of the River Liffey. This area offers great striking monuments such as the GPO (General Post Office) on the city main thoroughfare, O’Connell Street, or the Custom House along the quays, as well as the Phoenix Park, the largest public park in Europe. The south side appears more sophisticated with its vast Georgian squares, such as Merrion Square, where Oscar Wilde’s House can still be found (today owned by an American College), its colourful doors, along with Grafton Street and its quality shops. The students of Trinity College, where the famous book of Kells is permanently exhibited in its library, also dominate this part of the city. You will also pass by St. Patrick’s Cathedral and Christ Church Cathedral.

CHOOSE 2 OF THE FOLLOWING VISITS:

Trinity was founded in 1592 by Queen Elizabeth 1st on grounds confiscated from an Augustinian priory and is the oldest University in Ireland. The Campanile, erected in 1852, was built on what is believed to be the centre of the monastery. Built to further the education of the ruling Anglo-Irish families, restrictions were imposed to prevent Catholic from attending courses. These restrictions were not fully lifted until the 1970’s. Trinity however admitted women in 1902, earlier than most British universities. Most of the main buildings off the main square were built during the Georgian period, some of which replaced older buildings.  Within its walls, you will be able to admire Parliament Square and its 18th Century edifices. Trinity College has had many famous students such as Jonathan Swift and Samuel Beckett who later became a lecturer in French at the university. The Inter-denominational Church is very much worth a visit, should it be open during your visit. 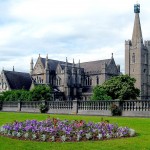 Built in honour of Ireland’s patron saint, Saint Patrick’s Cathedral stands adjacent to the famous well where tradition has it Saint Patrick baptized converts on his visit to Dublin. The parish church of Saint Patrick on this site was granted collegiate status in 1191, and raised to cathedral status in 1224. The present building dates from 1220. The Cathedral is today the National Cathedral of the Church of Ireland (a church of the Anglican communion). St Patrick’s is Gothic in style and its splendid interior is adorned with funeral monuments, such as The Boyle Family Memorial and the grave of Dean Jonathan Swift (author of Gulliver’s Travels). Swift was dean here until his death in 1745. The Chancel has ornate stained-glass windows, and spectacular choir stalls, once used by the knights of St Patrick, adjoin the Altar. The massive west towers, houses a large peal of bells whose ringing tones are so much part of the character of Dublin. 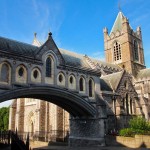 King Sitric Silkenbeard built Dublin’s first (wooden) church on this site in 1038. He was the first Christian Viking king of Dublin. The Anglo-Norman Richard de Clare (Strongbow) built the current building in 1172.  Ravaged by time it was almost fully restored towards the end of the 19th Century. Like St. Patrick’s Cathedral, it is adorned with Funeral monuments, including the reputed tomb of Strongbow, its founder and Irelands first Norman Conqueror. Unlike St Patrick’s, however, Christ Church possesses a crypt, which stretches under almost its entire length and much of the Cathedrals memorabilia is displayed here. Choral services are sung four times per week during term time either by the professional mixed-adult Cathedral Choir or by the Cathedral Girls’ Choir. Audio-guides are available to hire, which give a detailed tour of the cathedral including excerpts of the cathedral choir singing. 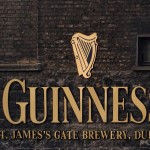 The Guinness Brewery in Dublin is Europe’s largest stout producing brewery and home to the Guinness Storehouse. Opened in 1904, the Storehouse was an operational plant for fermenting and storing Guinness. Today it houses a very fine exhibition dedicated to the Guinness story. Visitors will discover what goes into the making a pint of Guinness- the ingredients, the brewing process, the time, the craft and the passion. The exhibition shows how the brew has been marketed and how it is today sold in over 150 countries. Once the tour has finished, the guest is invited to the Gravity Bar to enjoy their pint of Guinness. 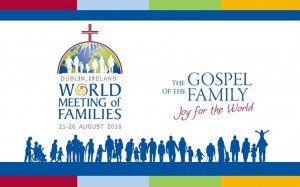 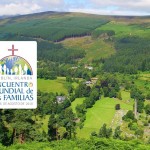 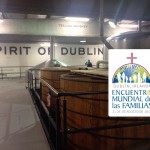 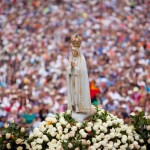 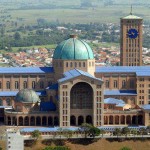